An Insider’s Guide to Mardi Gras in Mobile Bay, Alabama - The Scout Guide 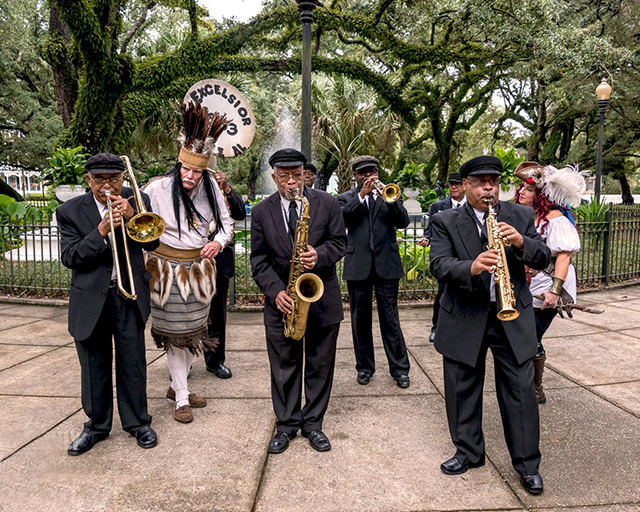 Most of us think of Carnival as originating in New Orleans, but Mardi Gras actually arrived in North America in Mobile Bay, Alabama, back in 1703. The celebration grew dormant over time, but was revived after the Civil War. Today, the merriment begins weeks before Fat Tuesday, and the Port City celebrates with elaborate themed floats manned by masked mystic societies, mounted police, and marching bands that wind through downtown Mobile and surrounding areas. To get an insider’s perspective on this yearly celebration, we asked The Scout Guide Mobile Bay editors Katie McNeil and Jamie Conger to share tips for navigating Mobile Bay’s Mardi Gras like a local. From the intel on the secret societies to the not-to-miss parades and parties in between, here’s what to know before you go:

The celebrations are steeped in tradition. The man who revived the carnival tradition in Mobile Bay, and is considered the founder of the area’s modern-day Mardi Gras, is Joe Cain. In 1866, in an attempt to bring levity back to the Civil War-weary residents, he dressed as an Indian chief, Chief Slackabamarinico (a.k.a. “Chief Slac”), and paraded the streets of downtown Mobile. Joe Cain Day is observed the Sunday before Fat Tuesday to honor the traditions that he brought back to life. Each year, a group of women dress in black funeral gowns and dark veils as Cain’s “Merry Widows” and walk to the Church Street Graveyard to mourn his loss, followed by the People’s Parade to honor him.

This is a family-friendly event. “Our culture in Mobile Bay celebrates family, food, and our rich history,” McNeil says. “Since we are a smaller community than our sister city New Orleans, our Mardi Gras is a bit more intimate—but not any less spectacular. All the city schools let out the Friday before Fat Tuesday and stay closed the entire week after, allowing all students and faculty to enjoy the revelry of time-honored traditions. Families fill the streets of every parade, with children on their parents’ shoulders hoping to fill their sacks with beads, moon pies, serpentine, plastic swords, frisbees, a coveted stuffed animal, or whatever else is thrown in their direction. For three weeks, it is a way of life for the families that live here; from preschool parades, to Mardi Gras-themed birthday parties, to the Juvenile Court, mystic societies, and masked balls, there is something fun for every age.”

They’re over the moon in Mobile. As one would expect, there are a few significant food traditions associated with Mobile Bay’s Mardi Gras celebrations, among them milk punch, king cakes, and the ubiquitous Bloody Mary. But none hold as much importance as their beloved moon pies. The moon pie is a chocolate-coated graham cracker cookie with a marshmallow filling that is the second-most thrown item from parade floats (only beads are more popular). According to Conger, legend has it that a group of women brought them back from a Chattanooga bakery thinking they were a good cost and safer to throw than the traditional Cracker Jack box. The idea caught on, and there are over 500,000 thrown during Mobile Mardi Gras every year. The confection has received mythical status in Mobile, and now a huge moon pie drops on New Year’s Eve, just like the famous ball in Times Square. 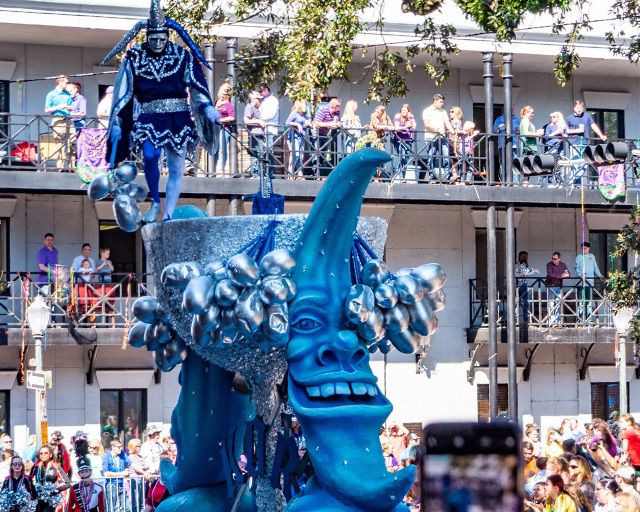 It’s all about the parades. Parades are held on both sides of the bay throughout Mardi Gras, but in downtown Mobile, there are over 40 that make their way down three or four different routes. Most parades load at the Civic Center, and the loading itself is always an exciting event to attend, as it’s an opportunity to glimpse the masked riders exiting the building dressed in costume as they get ready to ride. “As a child, I remember getting there early to watch my mom or dad load,” Conger shares. “They would always have something special to throw to me, because no one else could fight me for it. With our bags already half-full, we would then run a few streets over before the parade began to secure our spots.”

It’s important to scope out the best viewing spots. McNeil says that for the uninitiated, some great spots for parade-viewing would be Bienville Square or Government Street. During a parade, riders on the floats will throw all kinds of trinkets, from beads and moon pies to stuffed animals, peanuts, ornate plastic cups, and even ramen noodles. Have a bag handy to hold your treasures and try to get close to a barricade for optimal catching. Conger’s favorite parades to watch are Mystics of Time, on Saturday night; Joe Cain Day (People’s Parade), a daytime parade held Sunday; Infant Mystics, on Monday night; Knights of Revelry, a daytime parade on Fat Tuesday; Comic Cowboys, a daytime parade on Fat Tuesday; and The Order of Myths, the last parade of the season on Fat Tuesday night.

Get acquainted with the court system. There are two courts in the Mobile Mardi Gras, The Mobile Carnival Association and the Mobile Area Mardi Gras Association. Both elect a king and queen each year to “rule over” the city with their courts. (The Mobile Carnival Association Coronation of the Queen on the Saturday before Mardi Gras marks an event National Geographic magazine has described as rivaling that of royal heads of state in Europe.) The season’s debutantes, or ladies of the court, choose knights to escort them throughout the Carnival Season as they attend the top mystic societies’ parties and balls.

Inside the secret society. Mobile Mardi Gras traditions are in large part carried out by mystic societies, social organizations that meet throughout the year. Some mystic societies build colorful and elaborate floats, and members wear costumes and masks to parade through the streets during Carnival season. Others throw extravagant parties known as masquerade balls for members that are invitation only, and some mystic societies do both. For those interested in learning more about the mysteries and traditions surrounding the celebration, McNeil recommends a visit to the Mobile Carnival Museum, where you can see the intricate crowns, scepters, and robes of past Mardi Gras monarchs, and climb on an actual float. 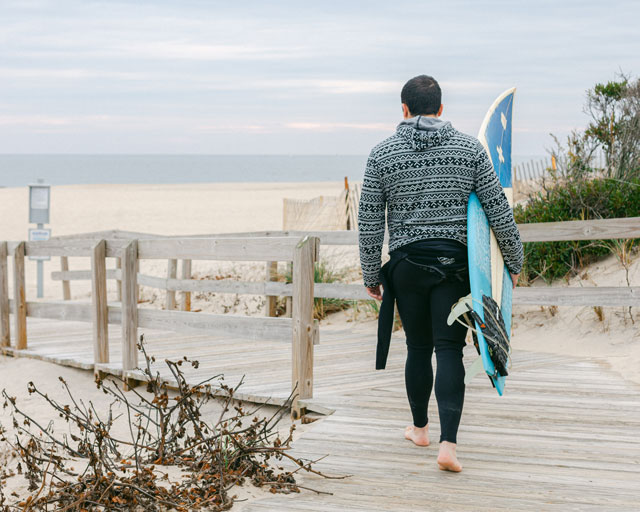 City Cheat Sheet: A Guide to Two Rivers and The Shore, New Jersey 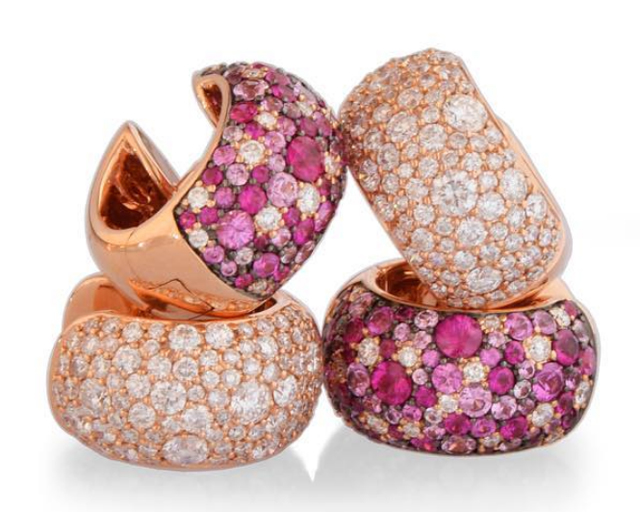 Scouted Fine Jewelers You Should Know About 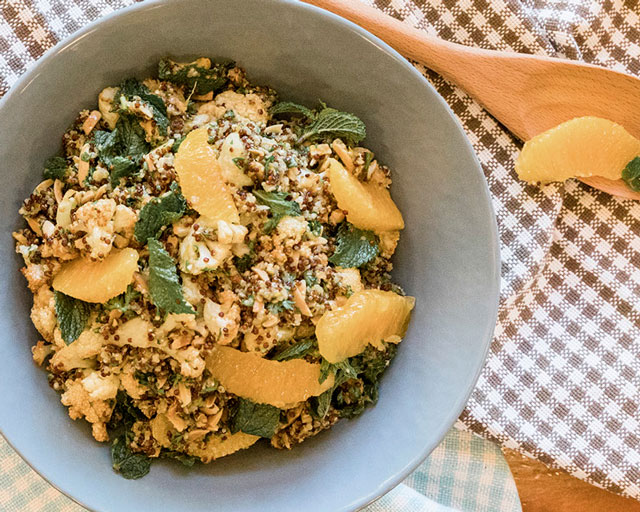 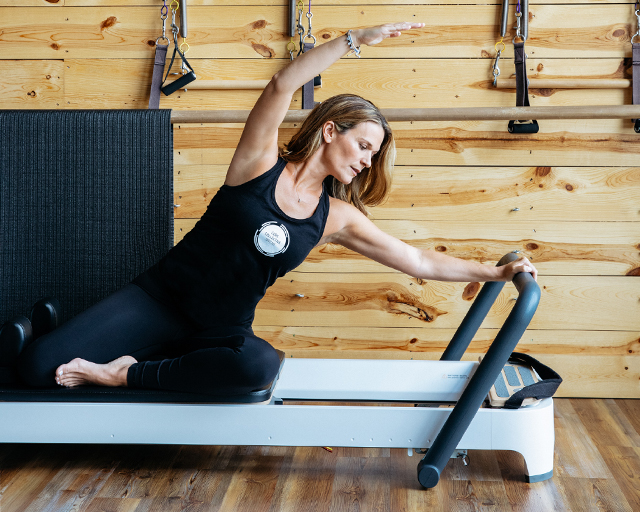 9 Five-Minute Workouts to Try This Month