Up close and personal with J.P. Horton - The Scout Guide

One of our favorite interior design tenets is mixing the old with the new, which can result in a beautiful and dynamic melding of styles that feels almost timeless. While speaking with interior designer J.P. Horton of the design firm Stedman House, we realized that he doesn’t just appreciate this approach; in a way, he also embodies it.

In many ways Horton seems well beyond his twenty-four years. He has a deep appreciation for antiques and craftsmanship, and enjoys seeking out rare finds and doing crewelwork in his spare time. Hired to work with venerated designer Lynn Warren at the longest-running design firm in Virginia, for the past year and a half he’s been honing his craft as Warren’s protégé, working on the Roanoke-based senior designer’s projects while also helping his own clients transform spaces. A love of classical influences makes Horton a perfect fit for the traditional-leaning Stedman House, and his attention to detail and desire to take on new challenges has already resulted in some inspiring work.

While Horton’s affection for the old runs deep, his design sensibility is not period-specific. Describing his personal style, he uses the term “eclectic,” noting that in his own living room he currently has an antique drop leaf table that his father refinished sitting on top of a brand new faux bois chenille rug. In addition to Warren, he lists Charlotte Moss, Bunny Williams, and Albert Hadley as his main influences—designers who have a keen business sense and combine different periods and styles of furnishings and pieces to make a room come alive and flow.

The past eighteen months, Horton says, have been an entire secondary education—one of the reasons he wanted to work at Stedman House, which has locations in Roanoke, where he is currently based; Wintergreen; and Charlottesville, where Horton plans to relocate this summer. Eager to sharpen his focus and skills, he was excited to work under a seasoned designer, and Warren’s portfolio, scope of work, and ability to create a “wow factor” in his designs made him an appealing mentor. “When I have stepped into houses he’s done, I feel like I’m in Architectural Digest,” Horton says.

Horton’s formal education—he began his training at Savannah College of Art and Design, where he spent a year doing all of his art foundation work and declared interior design as his major, and then continued at Virginia Commonwealth University, where he transferred after freshman year—taught him the fundamentals and reinforced his desire to pursue a career in residential design. He credits his time at Stedman House for teaching the decorating aspect of his profession and everything that goes into the details, including how to conduct a successful consultation with clients, create custom furnishings and source antiques, and manage the logistics of executing design and installations.

If his formal training sounds traditional and by the book, his path to pursuing design is charmingly Millennial. As a child, Horton enjoyed playing the life simulation video game The Sims, which allows players to create and care for virtual humans—and their homes. Horton would put his Sims’ lives on pause and spend hours building their houses. Years later, when he was introduced to the 3D rendering program Revit at VCU, Horton says, “It literally felt like a grown up version of The Sims. I guess I was preparing for school.”

Today, it’s the personal, organic elements of design that Horton finds appealing. When he begins a project, he starts by defining a color scheme by zeroing in on a painting in the room or talking to a client about their favorite hues or finding a fabric that he knows will be just right, and then lets it evolve from there. “I know I’m not the only one who has said this, but you never know how a room is going to turn out until it’s finished,” Horton says. “And that’s one of the fun aspects of it.”

One project that stands out for Horton as one of his favorites also happened to push him a little outside of his comfort zone. An artist who had volumes of work stored in her living room in southwest Virginia decided she wanted to transform it into a space she could enjoy. After seeing her paintings and collection of oriental rugs, Horton knew he was going to be working with a lot of red—not a color he’s typically drawn to. He embraced the challenge, incorporating a light taupe color on the walls to give the room depth, and selected cream accents to lighten up the space, which had dark oak paneling and trim.

Not only was Horton pleased with how the project turned out, but he was thrilled with how the process seemed to have a positive impact on his client. “I think my favorite part of my job is the end result, seeing how the room has affected the client for the better,” he says. “Seeing that a client is happy with the room, and that it’s also improved their lives—it makes it all worthwhile.”

See more of J.P. Horton and his work on Instagram. Get more stories like this delivered directly to your inbox. Sign up to receive The Scouted Life newsletter HERE. 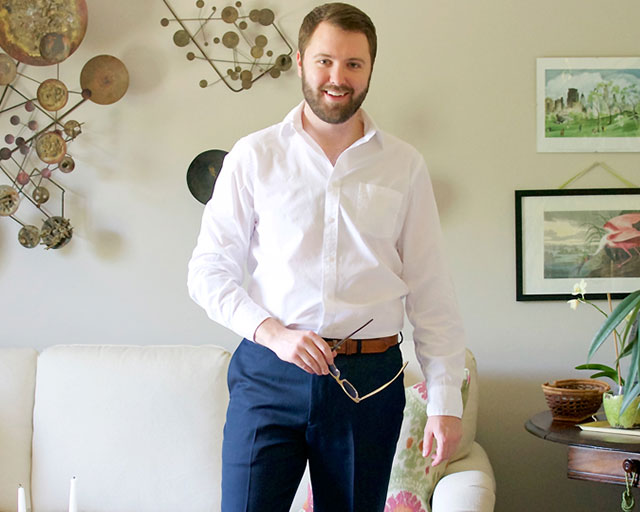