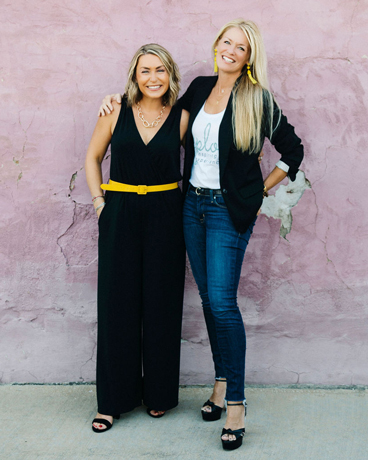 Born and bred in Saint Louis, Angela Sandler currently resides in the suburb of Creve Coeur with her husband, two children, and two dogs. After receiving a degree in merchandising and marketing from the University of Mississippi, Angela entered the world of department store retail buying and merchandising focusing on product development and private label business. After leaving the department store world to focus 100% on product development, Angela moved to Victorinox Swiss Army and ran the global product categories for travel gear. For eight years Angela traveled actively throughout Asia, Europe, and the United States working with designers, factories, retailers, and merchants selling, producing, and helping grow the Victorinox brand globally and domestically.

Upon the birth of her daughter, Angela took a step back and worked part time for another product company in sales operations until her son was born. In 2016, Angela and her business partner Lisa Litvag started a new technology platform named, Kidzxplor, which partnered local children’s class and activity providers with local parents in a membership service that allowed children to find their passion, and not break the parents bank, operating in both Saint Louis and Houston. Pivoting along the way,  Lisa and Angela rebranded into their current company, Xplor, a PR and experiential events company that connects local businesses and community by pairing them together via events and experiences and helps amplify their message and brand via influencer marketing, collaborations, and publicity. Through the process, Angela discovered her entrepreneurial spirit and hasn’t let go.

Angela began her relationship with The Scout Guide Saint Louis when Stacey Goltermann, the editor at time, contracted  Xplor to plan and execute their quarterly events. After four years of advertising in the guide, Angela and Lisa were presented with the opportunity to purchase the market and they seized it.

Angela’s love of community has grown over the years and her adoration for Saint Louis has her passionately introducing businesses to each other and helping to support the local community in every way she can. A cheerleader of all things local, Angela believes wholeheartedly in collaboration over competition and that we are all stronger together. She has seen the power of The Scout Guide work as a member and believes in the power of community.

When not visiting local coffee shops, restaurants, and boutiques, Angela stays busy spending time with friends and family, working out on her Peloton, traveling, reading, sitting in the sun, and supporting her kids’ sports endeavors. Angela’s excitement over The Scout Guide is a culmination of a 22 year career and a lifetime of hometown love—which just seems like kismet.

WORDS ANGELA LIVES BY:
“The only way to do great work is to love what you do.” – Steve Jobs

Though Lisa was born and raised in Chicago, Illinois, she fondly calls Saint Louis home. Upon college graduation, Lisa accepted her first position with a Saint Louis-based company and soon thereafter met her husband, Joe, a Saint Louis native, and fell in love with him, and her new city in short order. Lisa and Joe are living happily ever after, raising their two sons (and two pups) while surrounding themselves with their Saint Louis ‘people’ in the town that welcomed her so warmly.

No stranger to Missouri, Lisa received her undergraduate degree from The University of Missouri and a master’s degree from Fontbonne University. With a career that had her traveling 80% of the year, Lisa’s relationship with Saint Louis was long in development. Spending the bulk of her time operating on the West Coast, Lisa was busy building a career in the entertainment industry managing teams of sales and marketing professionals for filmed package goods and streaming services. Lisa led initiatives that innovated the film industry’s approach to delivering movies into America’s homes. Her aptitude for problem solving and approaching each challenge from the point of view of the customer, helped her implement solutions that promoted her into a position of overseeing the team and P&L for the number one customer and commercial business channel at Sony Pictures Home Entertainment.

In 2016 Lisa’s thirst for a challenge and her increasing desire to be close to home led her out of corporate America and down the path of entrepreneurship. Partnering with Angela Sandler, they set a course to disrupt the world of children’s activities. Both having small children who wanted to experience everything, Lisa and Angela developed an on-demand platform that allowed parents to subscribe to an activity pass, thus enabling them to ‘try it first’ and ‘drop-into’ over 150 local kid’s classes and activities for a monthly subscription fee. Out of this experience, Lisa and Angela recognized a market need for small businesses to reach consumers in alternative ways. Little did they know that circumstances in the world would demand innovation in the way small businesses activate and connect with their community. Their unique viewpoint of leveraging events, alternative publicity, platforms and positioning would lead to the birth of Xplor, an experiential marketing and public relations firm focused on small businesses.

Lisa loves to bring connection and fellowship into every encounter. Her sincere curiosity about all things Saint Louis has resulted in many a weekend spent exploring and experiencing the hidden gems this region has to offer. Her ‘in the know’ position enriches her encounters and creates true value for friends, family, clients, and members. Lisa’s passion for local is fueled by her quest to unearth Saint Louis’s unusual and off-the-beaten-path businesses and products.

“Work hard, be fast-fluid-flexible, and act with kindness! That’s all.”