Anatomy of a Room: Inside a Charming Gender-Neutral Nursery in Houston, Texas - The Scout Guide 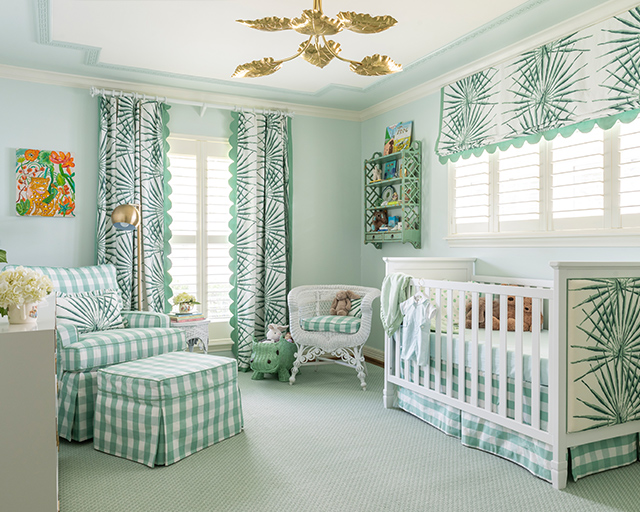 While it took seven months to complete from start to finish, the nursery that Lila Malone designed for her first child had been in the works for much longer. “I had been pinning and collecting nursery inspiration for a few years,” says the designer, who has been part of the Houston, Texas-based interiors firm Creative Tonic since 2014. “Finally getting to design my own home and nursery was a dream come true.” 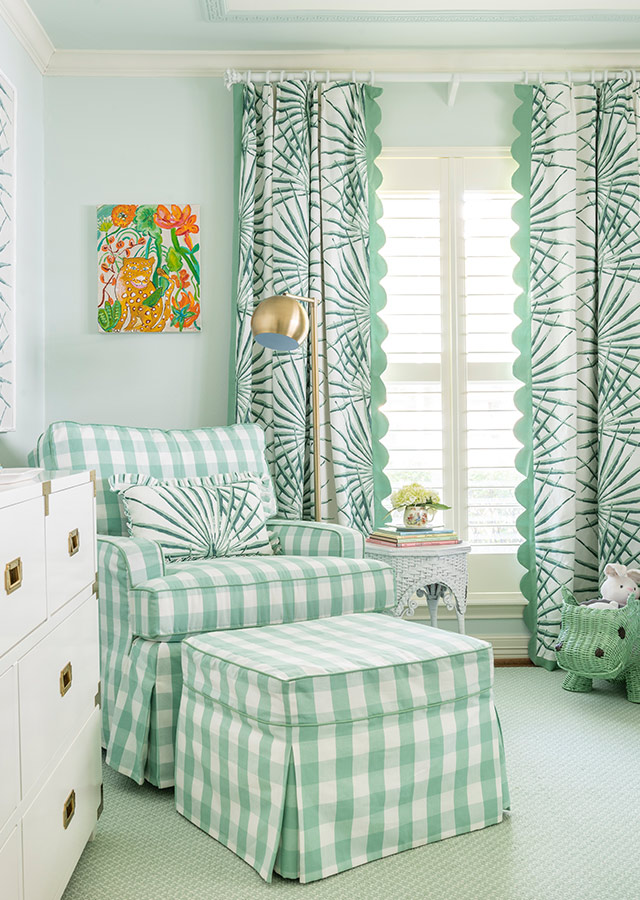 Since she and her husband intended to keep the baby’s gender a surprise, coming up with a color and fabric scheme proved to be difficult. While many people tend to play it safe with neutrals, that was not an option for Malone. “Neutral is not my cup of tea,” she acknowledges. After considering a variety of hues, mainly in shades of greens and blues, she ended up selecting what she describes as a “calming yet playful” combination of mint and lagoon, inspired by the palmetto palm leaf fabric from Palm Orleans that is used throughout the room. “It made me the happiest,” she says. To complement the palm print, she found a gingham fabric in an ideal coordinating color.

Courtney Elias, the founder of Creative Tonic, was a key collaborator, and one of the design studio’s hallmarks can be found in the nursery. Inspired by the ceilings in Elias’s mother’s home, the duo decided to have Greek key trim applied to the ceiling, then painted it one shade darker than the walls. “At Creative Tonic, we never forget about the fifth wall in the room,” Malone says. 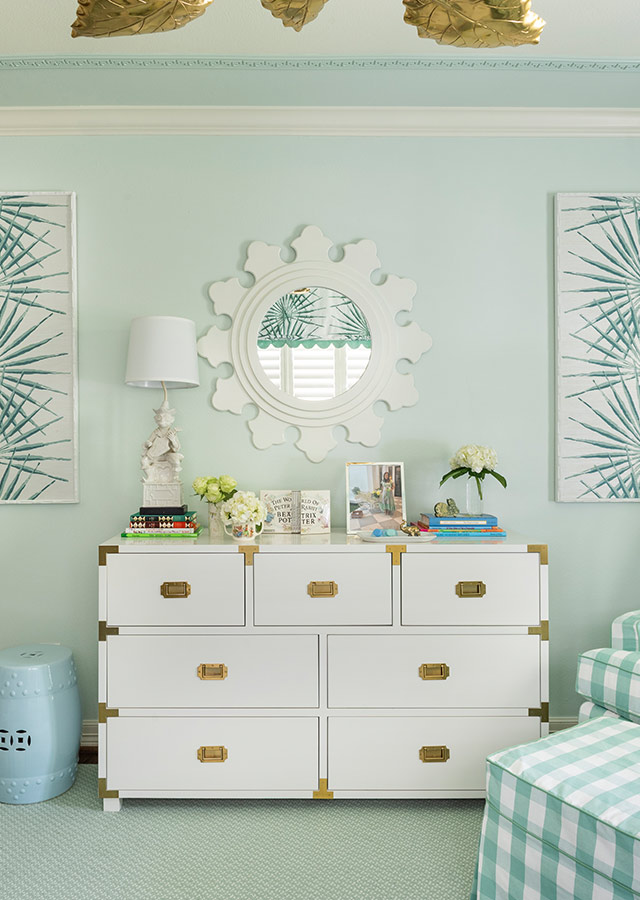 As was the case when she was decorating the rest of the house, Malone’s vision was to create a room that felt special, unique, and happy, full of color and one-of-a-kind finds. The finished project is a reflection of her keen eye, collector’s mentality, and close relationships. The brass palm leaf chandelier from Anthropologie was purchased before Malone had even decided on the fabrics (“I fell in love with it,” she explains). The scallop edging detail on the roman shade and drapes adds color and whimsy, while the glossy white palm finials adorning the custom drapery hardware lend additional interest. The campaign dresser is a timeless piece that will be easy to incorporate into other rooms for years to come. Malone’s mother, interior designer Bonnie Chumbley—who also helped weigh in on design decisions—gave her the monkey lamp that sits on the dresser, and the Chippendale hanging shelves and a wicker bookcase were sourced from Chumbley’s store in San Antonio. Last but not least, the painting of a leopard that hangs above the gingham glider came courtesy of her father by way of a family friend who had purchased it many years before, and recently gifted it to Malone.

While the size of the room proved to be a challenge—“the room is quite small,” Malone notes—the fact that the dimensions would not accommodate her original plans for a daybed resulted in another special item that’s now one of her favorite pieces: a small French wicker chair given to Malone by Elias’s mother. “It fits perfectly in the room, and it’s where my husband sits and keeps me company while I feed the baby,” she says. “And we don’t miss having a daybed at all.” 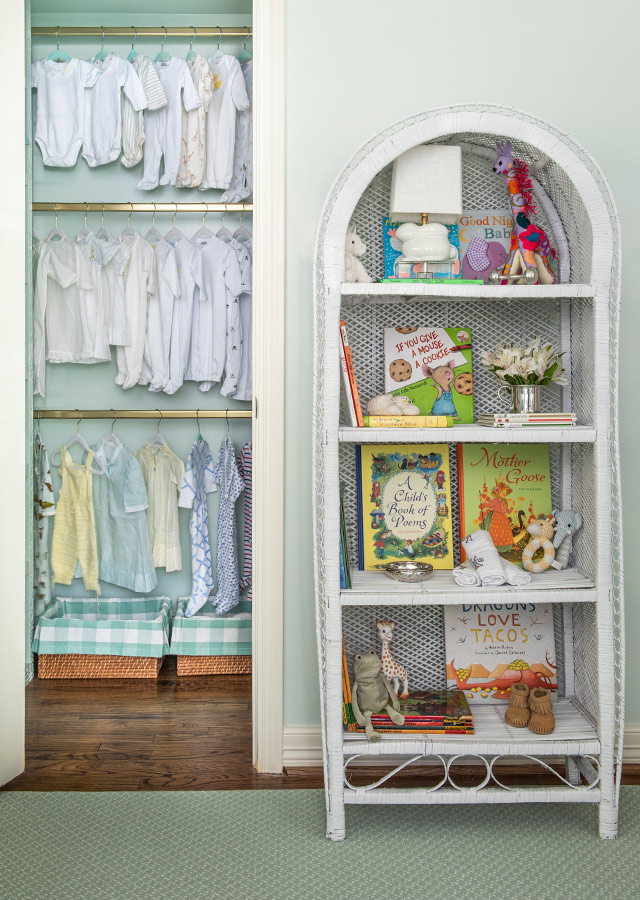 A true labor of love, the room is just the right mix of spunk and serenity that Malone was envisioning. Now the mother of an adorable baby boy, the forward-thinking designer has some idea of how the space might evolve over time. “Hopefully baby number two will enjoy the happy little oasis one day,” she says, adding, “Pink looks great with teal!” 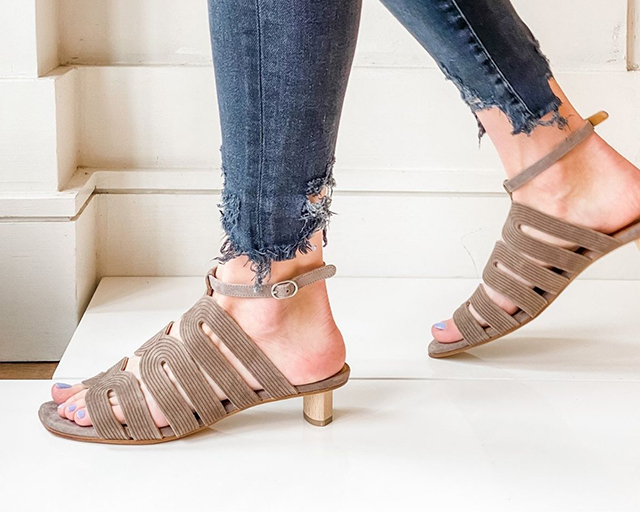 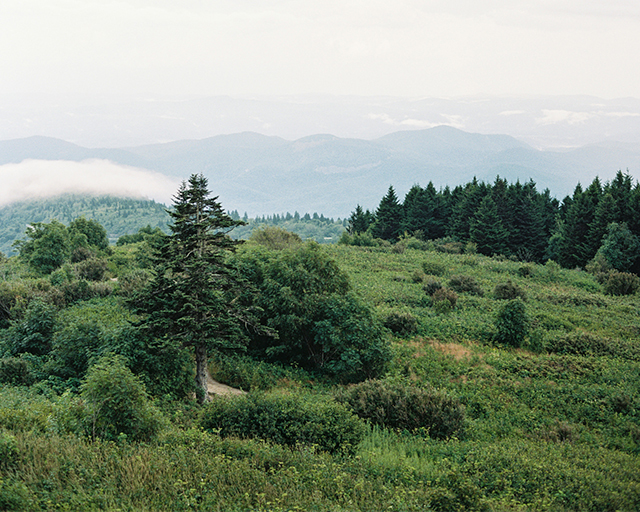 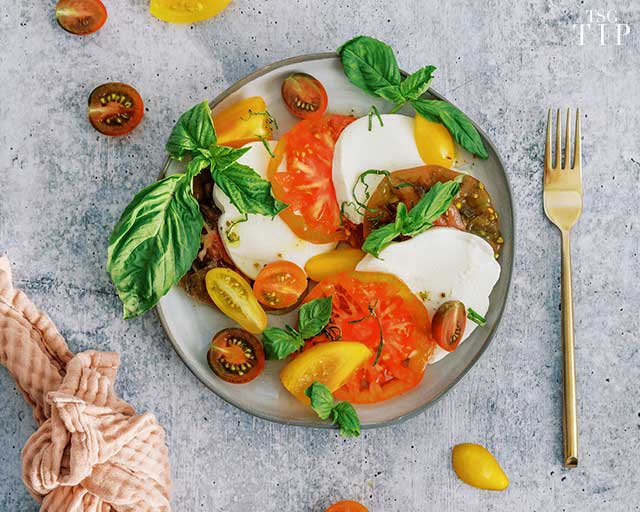 An Experts’ Guide to Summer Entertaining